The plastic cover over the digital display has one split in it but its only in the plastic and does not effect th The amp is in perfec Working and Good condition. No dents, just minimal, normal rack wear. Sale includes preamp, power cord, footswitch and footswitch cord. Expect that addictive feel of a Recto stack, mic-ed up perfectly, all inside a great room, instantly, anywhere.

Sounds amazing for both recording or for live use. I bought this used and don't need it any more. Powers on, works and sounds great. 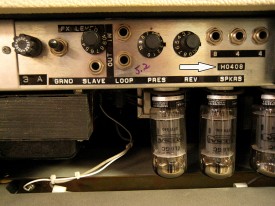 I used it with a digitech in the FX loop, so I know the unit is fully functional. You spoke, we listened.

The preamp is from the 's so it does shows wear including scratchy pots and switches. I am the kind of musician that holds on to my gear "just in case" I want to use it in the future. The gain display has a dent in the plastic as well as the dynamic voice display screen, this does not effect the working condition of the unit. All tubes are in good shape and work just fine.


This item has been tested and works great. Great for adding another channel or for warming up your solid state amp.


Add a little edge to your chords or go to maximum overdrive and distortion. This pedal, as you can see from the pictures,has se There is some light wear from normal and responsible use. Everything on the amp works and sounds great. This amp has a dual footswitch system: The two rhythm modes share all of their controls, while the lead mode only shares the rhythm modes' tone stack , featuring independent gain and master volume controls.

Most Mark IIIs have presence and reverb on the back except for long chassis' unless not desired by the buyer; Graphic EQ was also optional all in either head or combo format. Each revision had a slightly different voicing, but identical functionality.

Mark IIIs contain either four or five 12AX7 tubes in the pre-amp section, depending on if they have the reverb option. These are distinguished by either the absence of a marking, a black dot, or a black marker stripe above the power cord entry. This resulted in the first pot being labelled with Volume 1 in instead of the later Volume label. Furthermore, the pull function label above Middle knob was hand-etched onto the face plate resulting in a slightly different look than the other labels on the faceplate. Towards , a new PCB revision was installed which enabled an additional component to be switched on when R2 was activated.

This board was re-used in the Purple Stripes, although with a different revision number and different lead circuit component values. The power circuitry and presence cap remained identical to the previous stripes however. The lead channel was voiced so brightly, it is considered to be the most aggressive Mark Series Boogie ever introduced.

Mesa ultimately ended the Mark III's production since it overlapped with production of its successor, the Mark IV, which was introduced in Mark IIIs were still in steady production around , and finally ceased as late as , 11 years after its launch. The "crunch" channel is designed for use by hard rock and heavy metal rhythm guitarists. There were two versions of this amp.

Mark IVs built from the start of production until about September are referred to as version A; amplifiers made from late until the end of production in are known as version B. Early Bs have an attached power cord, like the A version. Version B has switchable reverb, a single switchable stereo effects loop, and an output to drive another power amp. Its voicings are altered slightly.

Both versions are highly regarded; production of the Mark IV ceased in The Mark V was introduced in early Much like its close cousin, the Triaxis Preamp, it features many voicings based on previous Mark Series amplifiers. It has three distinct channels, each with their own pre-gain three band tone stack, gain, master, and presence controls. Each channel also has three modes, which control several of the amplifier's 49 relays to mirror the circuit being modelled. The Mark V introduced a channel-assignable graphic EQ.

Older Boogies were equipped with graphic equalizers, but these did not allow the same flexibility. Each channel has a toggle switch able to select between EQ active, off, or footswitched. Similar to the Express and F-series amplifiers, the graphic EQ also had channel-assignable contour knobs. The Mark V - like its predecessor - comes standard in a Simul-Class format, but with a twist: Channel-specific Multi-Watt toggles dictate the power amplifier's operation class. It is a smaller, two-channel version of the Mark V.

It also features cab clone. The JP-2C was introduced in It also features two separate graphic EQs, which can be selected for each channel via mini toggles on each channel's front panel. Much like the Mark 5: The amp also features a switch to drop the amp's wattage down to 60 watts for use in smaller venues or recording. From Wikipedia, the free encyclopedia.